Rota A/S, originally Rota Maskinfabrik, was founded in 1973 by Tage Rosenberg.  The name Rota comes from Rosenberg, Tage.  Rota was a one-man company for a few years, but in 1978 the engineering works was taken over by Knud Christensen, who decided to take on staff.  This changed the company’s structure.  At the same time Tetra Oak became its new principle customer.  Throughout the 80s and 90s, Tetra Pak accounted for 90% of the turnover, and with its strict requirements for quality and production control over all those years Tetra Pak has helped shape Rota’s development – from a small machine shop to a dynamic and modern manufacturer in the field of machine tools for industry.

Per Marcussen took over ownership of Rota in 1989.  Ten years later Lars Valentin came in as a partner and expanded the customer base, reducing the company’s dependence on Tetra Pak.

Per Marcussen decided to retire and Rota A/S was established in its current form with three owner-managers: Lars Valentin, Martin Willum Jensen and Tony Marek Løve, plus a sleeping partner, Per Bodé.

Picture of the building / machine shop.
In 1996 we decided to extend our premises in Herlev, created a new production flow design, and set up new, efficient machining equipment.  This created an improved work environment enabling our skilled workforce to achieve optimum quality on even advanced and technically difficult products. 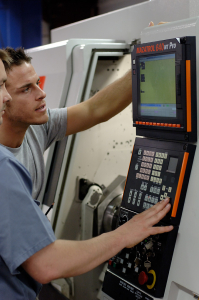